FRANCE. Blek Le Rat was first impressed with graffiti and street culture when he first visited New York City in the 70’s. He was taken aback by the walls and tags that were so prevalent in NYC during that time and was duly inspired. He came back to Paris with the idea to start painting walls with stencils and soon the city was seeing his now iconic Rat everywhere. He is regarded as the Godfather of Stencil art as although he did not invent the genre he has had a major impact in expanding and in many instances introducing the art form to many countries. Blek has painted wall all over the world and is admired and respected by many of his contemporaries openly such as Banksy. He tackles all manner of subjects from politics and economic disparity to pop culture in his works. Blek Le Rat has shown in countless galleries and institutions and has forever stenciled his name in the Street Art history. 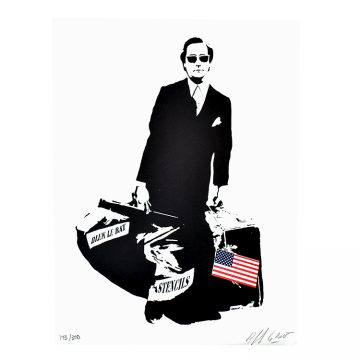 THE MAN WHO WALKS THROUGH WALLS